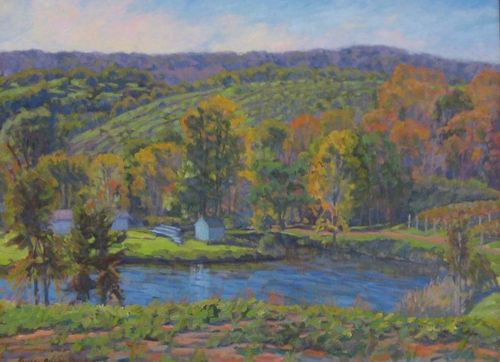 Roseann began drawing as a child and loved art. Her father was a skilled artist and she would often ask him to “draw me a horse” watching as he sketched. She would often paint outdoors in the fields and woods. Continuing her love of art into high school she was inducted into the National Art Honor Society. She studied art in college, alas majoring in finance. Determined to paint, she indulged her artistic passion soon after and spent two summers painting at the Lyme Academy of Fine Arts with Diane Aeschliman.

After being accepted into an alumni show juried by Jeff Cooley of Cooley Gallery, and Jack Becker of Florence Griswold Museum, she became active in the Lyme art community in the 90s and additional summers found her painting in Rockport, MA in workshops under the tutelage of Stapleton Kearns. Having lived a number of years in Hadlyme CT., she has been greatly inspired by the American Impressionists and Tonalists who painted the landscapes and dwelled in the area a century before.