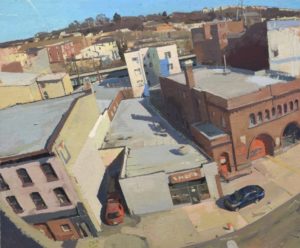 This workshop will address creative problem solving for the challenges of painting the city as a motif. We will learn strategies for simplifying complex environments using an understanding of space, structure and light, developing personal compositions with a compelling sense of space. Main topics will be linear perspective, pictorial distortion, the color of light and design. We will also address overcoming the practical difficulties of working on site.

Peter Van Dyck was born in Philadelphia in 1978. He studied painting and drawing at The Florence Academy of Art in Florence, Italy from 1998-2002. While studying, he also taught in the program from 2000-2002. He returned to Philadelphia in 2002 to paint in his own studio and began exhibiting his work in numerous group shows in Philadelphia, New York and San Francisco. He has had solo shows at John Pence Gallery, San Francisco in 2004; Eleanor Ettinger Gallery, New York in 2006; John Pence Gallery in 2008 and The Grenning Gallery, Sag Harbor in 2010.

In 2003 he began teaching at The Philadelphia Academy of Fine Arts where, in 2011 he bacame an Assistant Professor in the Certificate/BFA program. In 2012 he was named one of the 25 Important Artists of Tomorrow by American Artist Magazine. In 2013 his work was included in the book Painted Landscapes, Contemporary Views by Lauren P. della Monica. His work has also been reproduced in periodicals including American Artist Magazine, American Arts Quarterly, Art News, American Art Collector, International Artist Magazine and Art and Antiques.