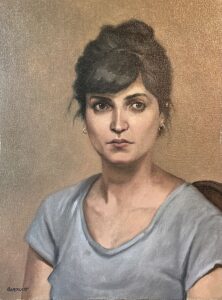 The focus of this class is for the student to successfully capture a likeness of the model in oil paint.

The first two classes will have the student work on small panels or canvases (16×12) in a value study mono-chrome to fully realize a completed image.

The third and fourth classes will have the student work in a limited palette on the same size panel or canvases (16×12). The same objective of creating a finished work for each class remains. The focus will be primarily on value while introducing the concept of temperature through color. 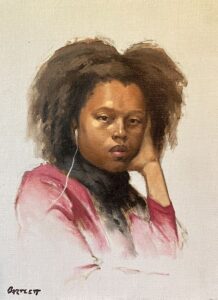 The fifth and sixth classes will introduce a more full palette of color with an increase of focus on value and temperature. The goal of creating a finished image on the small panel will remain.

The final three classes will have the student work on a larger panel or canvas with the idea of working on the same painting throughout. The focus on color and value remains. Additionally, at this point paint application, edges and style will be discussed and stressed.

Harley Bartlett lives in Rhode Island and was educated at the University of Pennsylvania (BA, 1981) and followed up with studies at The Pennsylvania Academy of the Fine Arts. (1984-85 year).

Bartlett has broad experience in the art world. He has exhibited his paintings in New England Galleries for over 30 years. His paintings may be found in many Rhode Island Institutions such as; Rhode Island College, Bryant University, Women & Infants Hospital, Newport Hospital, Lady of Fatima, South County Hospital, as well as; Aquidnick Land Trust, Kent County Hospital, Norman Bird Sanctuary Rhode Island Philharmonic School, the New England Institute of Technology, The Providence Art Club, The State of Rhode Island, The City of Providence, RI and the Town of Bristol, RI. He has been commissioned to create paintings for; the Amica Insurance Company, the East Greenwich Yacht Club, the Warwick Country Club, and the Harvard Club, as well as countless private commissions. He and his work have been featured in many articles in publications such as; American Artist Magazine, Florida Architecture, Traditional Home Magazine, Home Gallery (R.I. and S.E, MA.), and recently Soundings Magazine.

See more of Harley’s work hanging here at the Lyme Art Association and on his website: bartlettfineart.com